Many parents decide to visit London for New Year’s Eve as a family, and choosing what to do on New year’s Eve in London with kids deserves some thinking. London is simply magical during the Christmas season but ending a trip to London celebrating the last night of the year in style as a family makes this an unforgettable experience.

New Year’s Eve is possibly the most important night of the year in London, and thousands of people plan to spend this magical night in one of the most wonderful cities of the world. With so many people and so many options, it can be tricky to choose how to send new year’s eve in London as a family.

Virtually all museums and tourist attractions in London will open on December 31st, so choosing what to do during the day on New Year’s Eve in London with kids is usually not a problem. Some places may close early, but you should be able to do some touristy stuff during the day like any other day.

Museums open on the 31st of December

Some of the museums you’ll be able to visit during  the day on New Year’s Eve in London as a family are:

The British Museum is one of the most famous museums in the world and here you will be able to admire a large amount of archaeological remains of ancient Egypt as well as other artefacts. Kids normally love looking at these objects in the British Museum. You can easily spend a few hours in the British Museum. There are coffee shops and restaurants inside it too if you need to take a break at some point. Pre-booking advised.

The Natural History Museum has to be one of my favourite places in London to visit as a family. Not only is it absolutely brilliant to visit with kids, but it is also one of London’s most amazing places to visit.  As you enter the beautiful building where the natural history museum is housed, you’ll soon spot “Hope”, the skeleton of a whale that hangs in the central gallery of the museum. The museum is simply impressive and I’d say it is recommended if you’re choosing what to do during the day on New Year’s Eve with kids. The dinosaur exhibition is normally a favourite for the little ones. Pre-booking advised.

One of the largest World War II ships preserved in Europe. It is currently permanently anchored to the banks of the  and River Thames and it’s an incredible place to take the kids.

Let the little ones explore the cabins and the engine rooms, and let them feel like authentic sailors for a few hours. Absolutely worth a visit.

Highly interactive museum where your little ones will not only be entertained for hours on end, but where they will also be able to learn about the solar system, the human body, physics and chemistry experiments… They probably won’t want to leave!

London’s Transport Museum is one of our favorites to visit with children. It is a very interactive museum for the little ones, and they will undoubtedly be fascinated when they find our they can explore London buses as well as trains from Victorian times.

Where to find it: 221b Baker St, Marylebone,London, NW1 6XE.
Nearest Underground Station: Baker Street.
Entry fee: Adults £16, children over 6 £11.
Opening times: Open daily from 9.30 am until 5.00 pm, with normal opening times on the 31st of December

Winter Wonderland in Hyde Park is a must see during Christmas in London and definitely not one to miss if you’re visiting London with kids. It will be open on December 31st from 10 am to 5 pm. It would probably be a good place to visit during the day on New year’s Eve in London with children, exploring the Christmas markets, the funfair and the ice skating rink. There are also numerous restaurants where you will be able to grab some lunch.

It can take you about 3 hours to visit the Tower of London, so if you decide to visit on December 31st, we would recommend that you get there no later than 9.30 am as it’s probably going to be one of London’s busiest tourist attractions on this day.

Located in the northern area of Regent´s Park, London Zoo is one of London’s favourite attractions to visit as a family.

It is the oldest scientific zoo in the world since it was inaugurated in 1828. The original plan was to keep it as a space for the study of species, but in 1847 it was opened to the public and today it is home to almost 800 species.

Most restaurants in London offer a special new year’s eve meal, including lots of family-friendly restaurants. It is important to book in advance if you want to dine in the city centre.

Some family restaurants you may also want to consider are the Italian restaurants Bella Italia, Zizzi’s or Prezzo.

Jungle Cave is one of London’s favourite themed restaurants for kids. Dine in the jungle, with tropical fish swimming in large aquariums and the sounds of the rainforest and thunderstorms in the background! We love the jungle cave as an experience, and little ones do love this place, but be warned that the food isn´t the best in my opinion and it can be quite pricey. Nevertheless, visiting this themed restaurant can make New Year´s Eve very special.

Where to find it: 20 Shaftesbury Ave, London W1D 7EU
Nearest underground station: Piccadilly Circus or Leicester Square.
Price: No set menu for NYE, but in our experience it’s normally around £25 per person.
More information: Jungle Cave

Party like a rock star and celebrate New Year’s Eve in style at the Hard Rock Cafe Piccadilly Circus in the very heart of London. Surrounded by the iconic memorabilia, enjoy amazing cocktails, legendary food, festive vibes and a DJ spinning tunes. There´s a New Year’s Eve Festive Menu, and children are welcome!

One of the best ways to welcome the New Year in London has always been by cruising the Thames overlooking the New Year’s Eve fireworks at the London Eye. 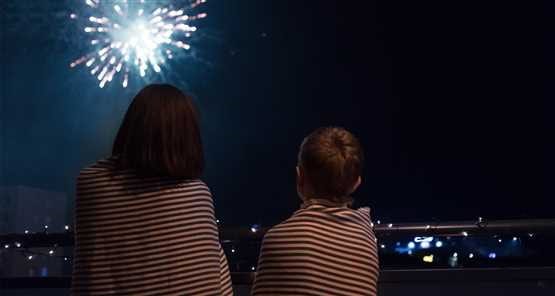 The Gala City Cruise is now of your best options if you’re looking for a special family-friendly New Year’s Eve Cruise in London. Children over five years old welcome.

This is a 5-hour river cruise with a 4-course sit-down meal and one bottle of wine for every two adults. There will be live music and a dance floor to dance the night away. It departs from Tower Pier at 8:00 pm, cruises to the London Eye to see the fireworks, and returns at 1 am. See Map.

The Stargazer cruise is another child-friendly New Year´s Eve River Cruise. This cruise lasts for 2.5 hours, and kids over five are welcome.

This river cruise includes a Picnic Box with a sandwich, crisps, a small chocolate bar, a mini bottle of champagne, or a soft drink. The boat has a glass ceiling with panoramic views and a bar on board. There is indoor and outdoor seating. It departs Tower Pier at 10 pm, cruises to the London Eye to see the new year’s eve fireworks at midnight, and then returns to Tower pier at 1 am. See Map.

> From the banks of the River Thames

If you want to watch the London Eye New Year’s Eve fireworks live from the banks of the River Thames, you need to make sure you buy tickets in advance as they sell out very fast.

Do we recommend buying tickets to watch the New year’s Eve fireworks in London with kids? The answer to this question will probably depend on how old your children are. It is definitely an option, but there are two things you need to have in mind: 1 – the large number of people who attend this event, and 2 – the waiting, as you usually have to go in 2 to 4 hours before the fireworks start.

It also isn’t clear on the official website that buggies are aloud, but I really don’t think you’d want to take a buggy somewhere as crowded as this.

Then once the fireworks have finished, everyone tries to get out at the same time, and this may be a bit overwhelming with small children.

The best things to do on New Year’s Day with family are:

On the 1st of January London celebrates the New Year with one of the year’s most anticipated events: The New Year’s Day parade. This is an impressive parade, which runs through the main streets of central London and it’s a fantastic way of spending New year’s Day in London with kids.

London’s New year’s Day parade will start on Piccadilly Street at noon. It will then pass through Piccadilly Circus, Trafalgar Square and Whitehall, reaching Parliament Square, next to Big Ben and Westminster Abbey. It is expected to reach Parliament Square around 3.30 pm.

Cèilidh at the Southbank Centre

Join the Cèilidh that will take place at the Southbank Centre for free, a great experience for new year´s day in London.

Winter wonderland in Hyde Park will also  be open on New year’s day, and this may be the perfect day to go if you haven’t taken the kids yet!